The competition is stiff for universities to attract and keep the best and brightest students.
Not to mention to get them to pay steep (and ever rising) tuition prices.

In fact, there are 2618 accredited colleges in the US competing for a pool of  20.2 Million students.  That may seem like quite a bit.  It’s not.  Breaks down to about 7700 students per school.

It’s competitive.
On average private colleges spend $2,232 to recruit each student. An average school will have an new incoming class of 3000 students. The universtity will spend about $6,696,000 per year recuriting a new class of students.

Colleges HAVE to be able to market themselves effectively to compete.

So we decided to hold the College Content Marketing Playoffs.

And just like the decathlon determines the world’s greatest athlete, we’ve put colleges through the paces and determined the colleges that are the best at content marketing. 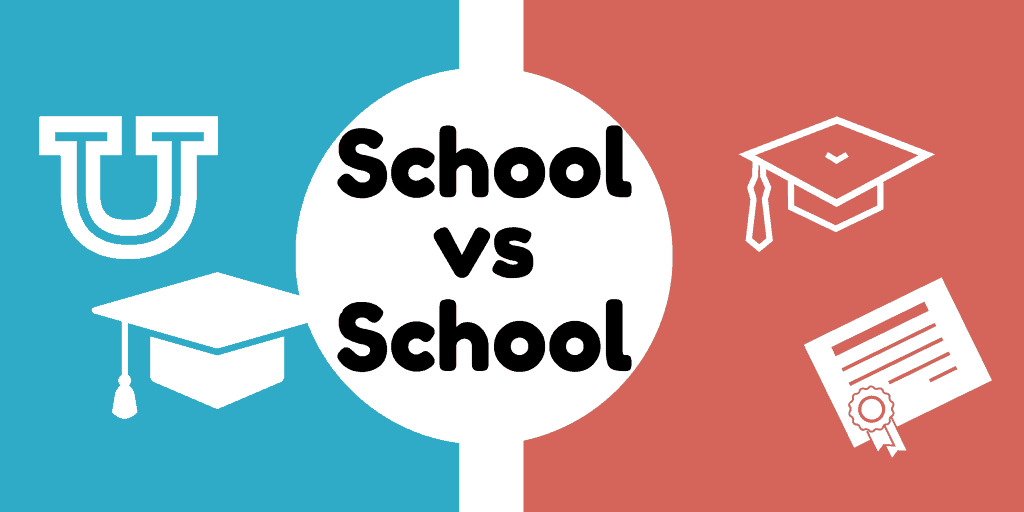 We’ve used data from Ahrefs and Buzzsumo to analyze the success of content from the Forbes list of America’s top colleges.

First up is the sharing battle.

We began by collecting data on how often each college’s articles were shared.  The following table shows the top 50 colleges that have the highest average shares per piece of content. 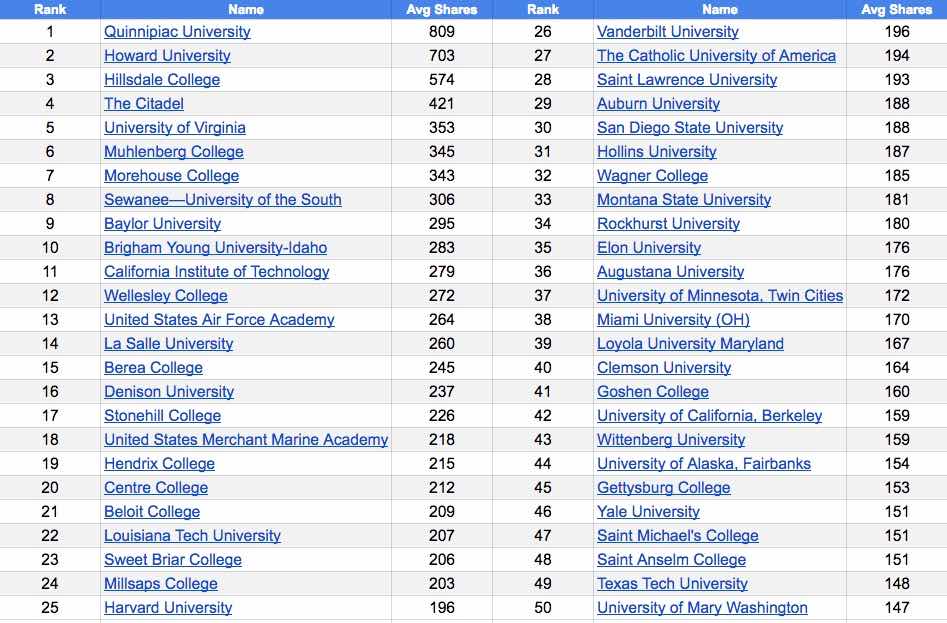 No.1:
Quinnipiac University is the top dog.

With published 71 articles which average just over 800 shares per post.  QU conducts and publishes polls that cover popular topics such as the 2016 elections, almost anything related to trump, popular national sentiments and trends.  These polls drive a majority of their social shares.

Notable underperformer:
Not in the top 50, Iowa state University is the most prolific school with the fewest number of shares per article.  Having published 8,692 articles and only getting an average of 13 shares per articles, Iowa State ranks 416th on the list.  Sorry Cyclones.

All of the top fifty schools get at least double the number of shares that the average school gets.

Just about half of the top fifty are liberal arts colleges, whereas the other half are larger universities.  The data suggests that neither the size of the college nor type of college has an effect on the school’s ability garner social shares in most cases.  However, school size can be a factor in generating shares for particular articles (discussed below).

Here’s how the top 50 schools with the highest average shares per article shake out in terms of school size: 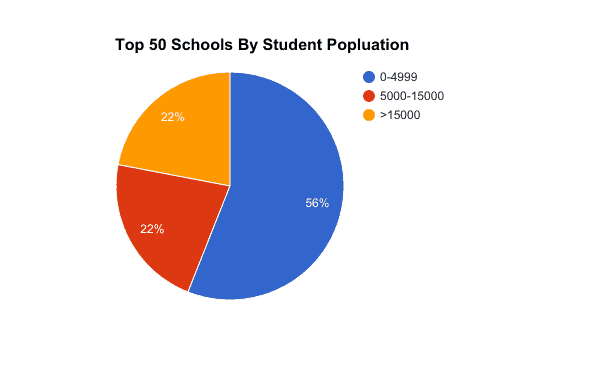 The second event is traffic generation.

Great content has to be able to drive traffic to the website.  So based on Ahref’s organic traffic calculations, we figured out which colleges content gets the most traffic. 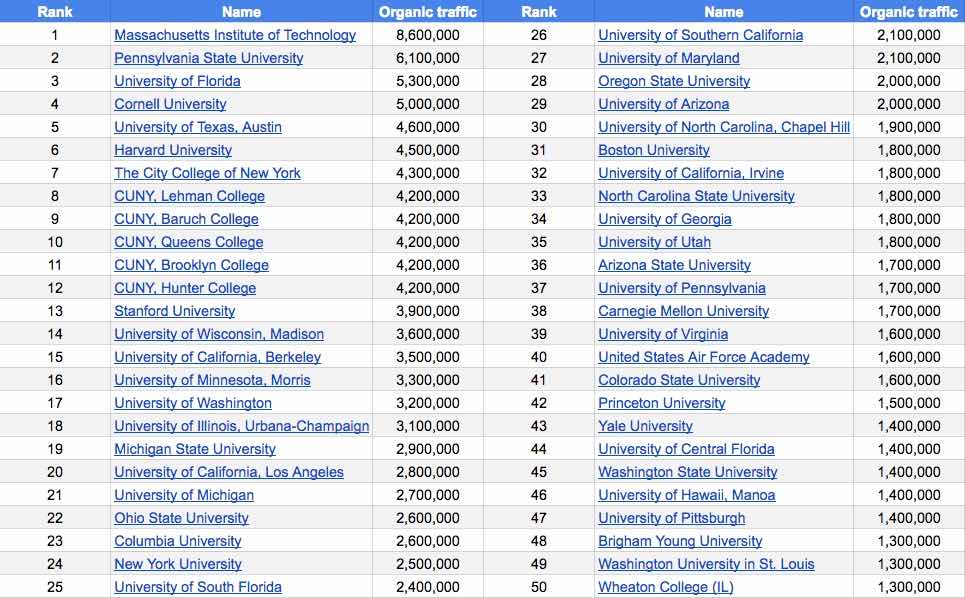 We compared the traffic going to each college’s website.
Because colleges post content to various subdomains we took a look at the traffic coming to their domain as a whole.

With a massive 8,600,000 people visiting their site per month, MIT dominates the number one position.

mit.edu gets almost 12,000 visitors per hour.  MIT’s most popular posts and the posts that drive the most traffic tend to be about explanations of new scientific breakthroughs.  In analyzing their published articles from the past year about ⅓ fall into the broad category of Science, ⅓ are about Technology and another ⅓ are related to the internet.

One of the biggest drivers of traffic for MIT isn’t a traditional blog post.  Rather it’s something we can consider “BIG” content.  Scratch is a programming language and online community created by MIT to encourage youth ages 8-16 to start coding.  It allows members to create animations, computer games and more.  Not only does scratch do social good, it drives a large amount of traffic to the MIT site.

Second place:
Penn State similarly posts often about scientific breakthroughs.  However, Penn’s blog is far more varied in scope.  The school also concentrates on US news and politics and internal U Penn issues.

Of the top 50 we find a familiar cast of characters at the top of the list, with well-known college names dominating.
So we decided to find out which smaller schools with under 5,000 students are also rocking it.

Which small schools are traffic rockstars? 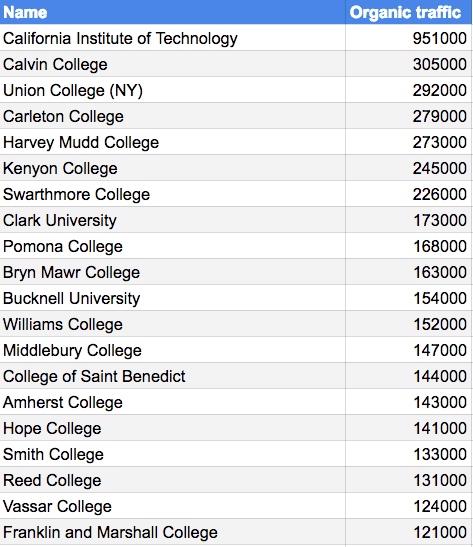 If you don’t recognize some of the names, that’s the point.
Some of these smaller schools may not be household names (yet) they’re well on their way.

***We’ll Return after a brief message from our sponsors ***

We tried to level the playing field again and look at the most popular articles published by each college. By analyzing the titles for all the most shared articles, we found that the two topics, US news and news about the college itself, got the most shares.

Here are the top 20 most shared articles:

Though it’s the exception, by sheer volume of students, a larger college can create a massively shareable article, though it may only appeal to students and people connected to the college.  The 10th most popular article comes from the University of Alabama.  Titled: Dean’s List Students Named for UA Fall 2015 Term, the article would seem only to appeal to university students and families. With 37,665 students and likely family sharing, the post was shared 52,9000 times.

Like you might expect, the colleges who published most were more likely to have a highly shared article. There’s a 42% chance that if the school was in the top 50 publishers it also had one of the top 50 most shared articles.

So which college’s content team produced the most articles?

Which schools published the most?

Unsurprisingly, the larger universities produce the most in terms of sheer volume. A Larger staff, more departments and bigger student bodies all make it easier to produce more content.

Large schools out produced small schools by about 12.5x. 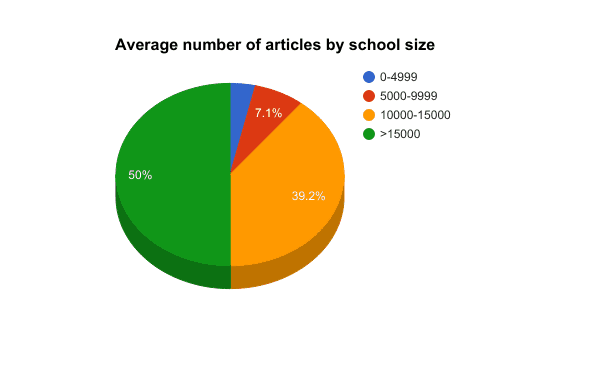 Size matters.  But does money?
Would the schools charging more money for tuition be better at marketing themselves and spreading their reputation through content?

Schools that charged more for tuition got a higher number of shares on average than their lower priced counterparts.
We also compared the most popular articles that the schools produced.

We also compared the most popular articles that the schools produced.  The schools at the upper echelon who charge $60,000+ per student per year also garnered more social shares for their most popular works.  And their articles were more than twice as likely to be linked to compared to schools that charged just $10,000 dollars less.

However, they did get marginally less organic traffic to their websites than schools charging between $40k – $50k per student.

Which schools came out on top in the college content marketing playoffs?

We used a weighted scoring system to determine the winner.
The top five schools were able to create a large body of popular content that drives traffic to their websites.

It’s no surprise that all three of these schools were consistently amongst the best across the metrics we tested above.

Congrats to all the top ranked colleges and the content creators.  If you graduated from one of these schools, be proud.