The Complete Guide to ChatBots for Messenger Marketing Funnels – Part 3 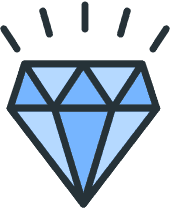 What if you could go back to the golden days of email marketing… getting 70% open rates and 30% Click through rates? What would that mean for your business? Right now marketers are getting 80%-90% response rates with Messenger Marketing

Want to know if Messenger Marketing is right for your business?

Get your Messenger Marketing Match Score…

<!-- [et_pb_line_break_holder] --><div class="mcwidget-embed" data-widget-id="43881"></div>
We’re at the cusp of a change in how we humans are able to interact with computers, other people and companies. More and more people are using messaging platforms. And here’s the key – it’s making interaction faster and easier.
“Messaging apps are the platforms of the future and bots will be how their users access all sorts of services”

The Meteoric rise of Messaging apps

Messaging apps have about 500 Million more active monthly users than social networks do. 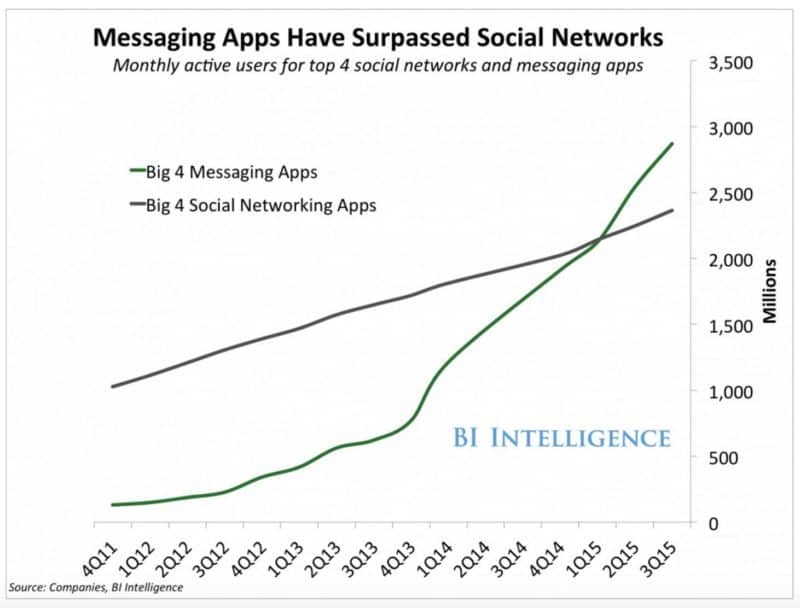 All chatbots need a platform (think Facebook, Slack, Telegraph).  The bot could even be hosted directly on your website.

But, there are some BIG benefits to hosting on Facebook. You can use Facebook’s data and built-in functions like personalization, location services, direct to messenger ads.  And creating your chatbot for Messenger lets you directly message users in a way they love. 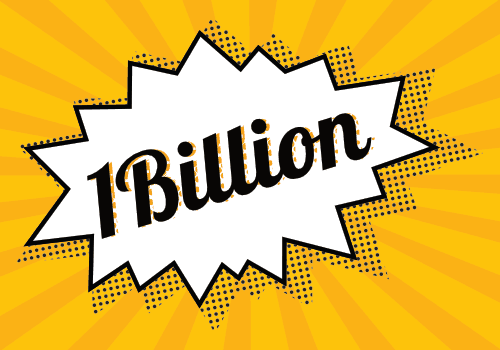 There are now over 1 Billion people on facebook messenger

On Facebook Messenger, people can search for pizza, get weather updates, buy products, get more info about services and even learn about messenger marketing.

There was an explosion of bots as soon as the Facebook Messenger platform opened to developers. Quickly over a five-month period, there were about 34,000 bots. 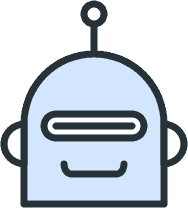 Why has the Messenger boom happened?

Conversational bots and apps are organized around how you organize your life.  Because of that, these bots make your life easier.

I just bought a new iPhone 7 about 4 months ago.

First thing I did was to sync my contacts (which didn’t go all that well actually).
Setup email. And install my normal set of apps that make me feel at home.

Guess how many apps that I had before didn’t make it back on?
95%

What made it back on immediately?
Slack and Facebook.

Poncho the Facebook Messenger weather was still there telling me if it was a good day to run or not.

Chatbots are damn easy to use

“[chatbots are] integrated tools that make it easier to do regular tasks in a comfortable and familiar place: Within a conversation.”
– Chris Messina

There’s a saying among UX designers.  For a website, nothing should be more than 3 clicks away.

Some designers call BS.  A study showed that it made little difference if a user had to click 3 times or even 12 times.

How many clicks away should something be with a chatbot? Zero or One. In a well-designed bot, the designer will guide you with buttons.  One Click.  No more searching through poorly designed sites. No more clicking 3-4 times (or 12).

It can either help you keep users addicted to your product, or it can be a huge barrier to getting people to keep coming back for more.  (3 great reads if you’re interested in the topic:  Hooked by Nir Eyal, Badass: Making Users Awesome, Predictably Irrational)

For most apps, it’s the latter. Habit prevents people from continuing to use an app.

On average the typical US smartphone owner uses 27 apps.  That’s been the same since 2012. Seems not so bad for apps right?

Even more encouraging – consumers spend 85% of their time on smartphones in Apps!

Yeah.  Not looking so hot for everyone outside the top 5.

Which leads us to the top 5 apps by of visitors (data for the month of June 2016) according to the mobile app report. 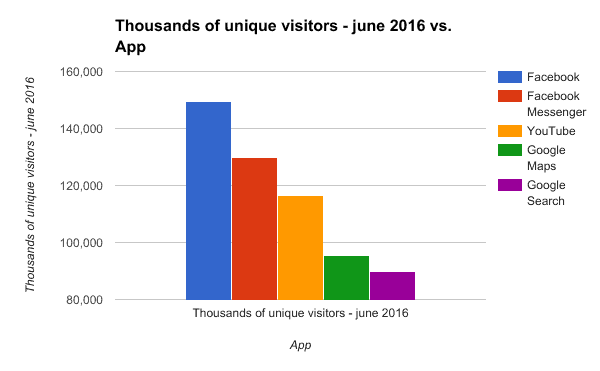 Just 2 companies dominate user app use. Consumers spend 90% of their time in an app made by either: Facebook or Google. At the #1 and #2 spots with:

How likely do you think it is that your app will break into the top 5?

Instead of competing for space why not take advantage? 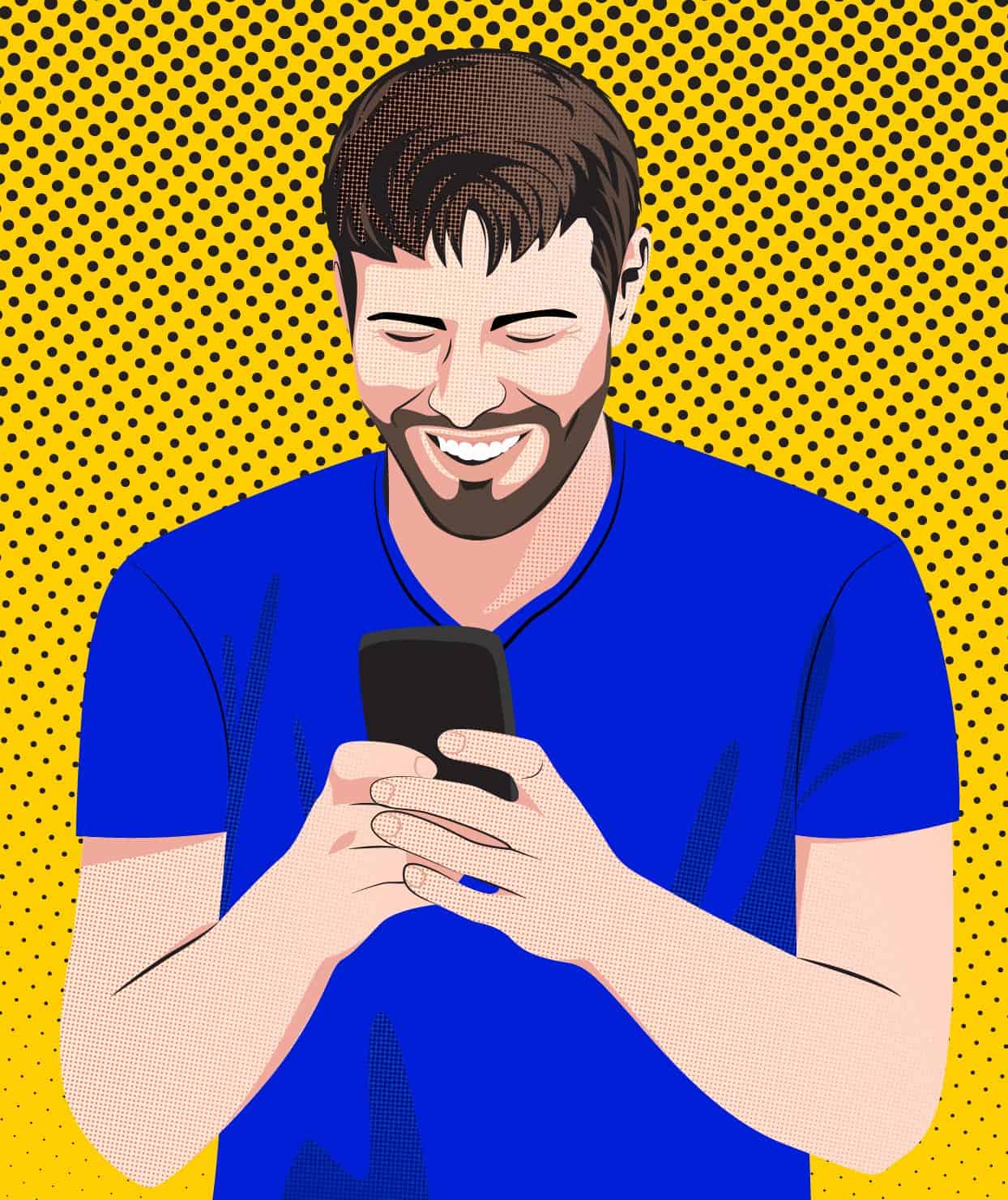 Chatbots live inside these “unicorn” apps.

And a Messenger bot takes advantage of the biggest unicorn of them all.

Chatbots aren’t competing with people’s established behaviors. Bots live within the apps and platforms they already use most and communicate in a medium people love to use. Because of this bots don’t have the challenge of establishing a completely new habit and pattern of behavior.

In fact, it’s the opposite.

Facebook has a vested interest in seeing bots succeed and grow. Whereas with apps and websites it’s in Facebook’s best interest if they fail. Every second spent inside a different app or website is a second not spent on Facebook.

But every second spent in a Messenger bot makes Facebook happy.

And they are actively promoting and helping Messenger bots succeed.

According to a study by Microsoft, the average attention span dropped from 12 seconds in 2002 to only eight seconds in 2013.

It’s hard to capture attention on a website or in an app.

But we love to message.

In the under 24 crowd, for every hour they spend in email, they spend 8 hours in messaging apps! 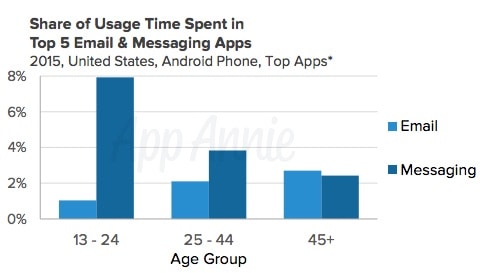 Millenials and Gen Z send TONS of messages every day. 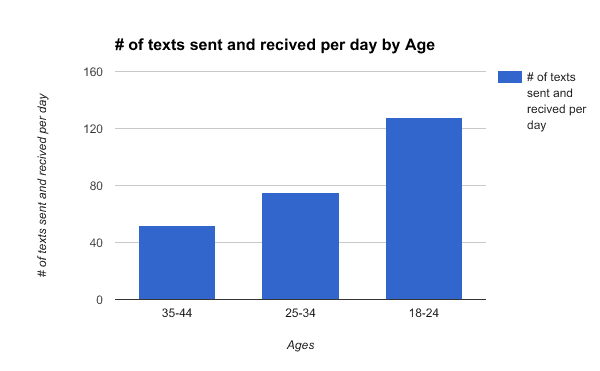 Nearly 75 percent of the world’s internet users already use messaging services, and 64% of consumers prefer text to voice as a customer service channel.

We as a group like texting so much that we’ve found ways around the vagaries of the medium.

It’s hard to tell if someone’s being sarcastic in a text message.  Or to quickly convey a complex thought.  Enter emojis.

Your future customer base speaks in emoticons.

Check out a Gen Z conversation:

If you haven’t grown up using emojis, you might feel like you need a modern version of the Rosetta stone to understand it. 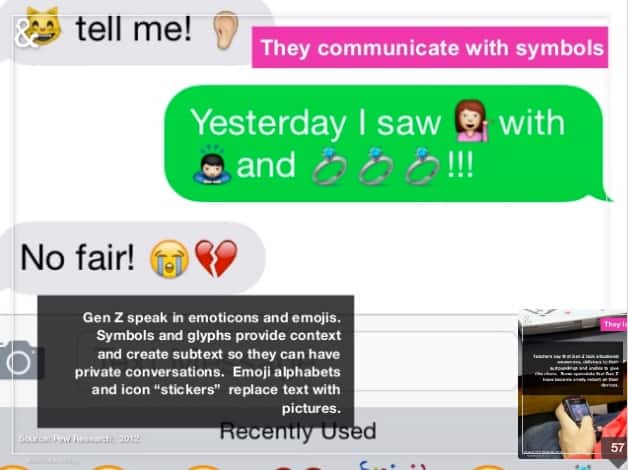 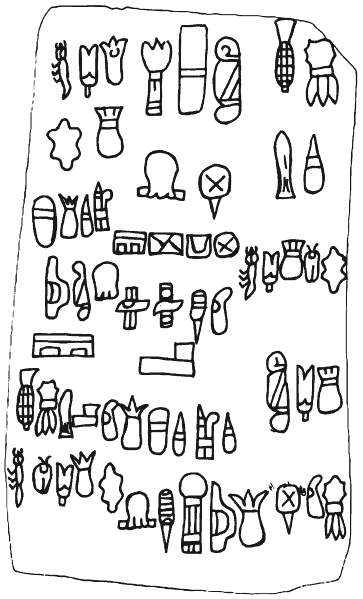 And even millennials (whose purchasing power is estimated at 200 billion dollars in 2017) use emojis often. A study that looked at the way in which generations text found that 80% of people use emojis on a regular basis.

Because I know someone will bring it up…

What about the rise of image and video-based apps/social networks.  Don’t they (the younger gen) like pictures more than text?

No denying that Pinterest, Instagram, and others are on the rise.
But guess what you can put in messaging apps too…

For now, Messenger is the best of both worlds.

In a recent survey, 63.9 percent of consumers thought that: “Businesses should be available and contactable via messaging applications.”

In the same survey, 49.4 percent of the people said they would rather use a messaging application than a phone call to communicate with a business.

Bots are fast & tailor-made for mobile

More and more browsing, commerce, and connecting  done from mobile. “Smartphone penetration is up to nearly 80 percent, and more than one-half of all web traffic comes from mobile devices.” (Adweek)

Chatbots are particularly well suited for mobile — perhaps more so than apps. Messaging is at the heart of the mobile experience, as the rapid adoption of chat apps demonstrates.

Messenger Bots Are Available All The Time

Sleep? Eat? Nah. The whole purpose of a bot is to serve your customers.

We don’t Need AI and NLP. But they’re quickly getting much better.

But as AI gets better there’s reason to begin incorporating it in chatbots.
AI can cut down on your work because your bot will continue to learn and improve conversations automatically.

And it can lead to deeper customer understanding by allowing more free-form input.

AI is getting smarter and seems less and less artificial all the time.  A big part of that has to do with advances in machine learning and more data that’s out there for AI to learn from.

Soon AI will hit a tipping point where it’s helpfulness will outweigh its potential for frustrating the user.  Once that happens it will be icing on the cake for marketers.

The Case of Jill Watson

Remember back in college or grad school… Did you ever have a fantastic TA? A person who was smart, helpful and responded quickly?

Ashok Goel, a comp-sci professor at Georgia Tech, decided that he wanted to give his students a TA who fit all three criteria above.

He had Jill along with other human TAs available to answer questions via the course’s online portal.

During the course students remarked:

“I feel like I am part of history because of Jill and this class!”

“Just when I wanted to nominate Jill Watson as an outstanding TA in the CIOS survey!”

The sly professor didn’t reveal Jill’s secret until after the students had turned in final exams.

The students were taken aback but, were more excited than ever about comp sci.

Who’s decided that chatbots and messaging will be the next big thing?

Some large companies are placing big bets that messaging, and conversation based interactions are the future.

And Facebook has been aggressively pursuing the messaging space ever since, acquiring Whatsapp for $19bn and building Messenger up to 900 million users worldwide.

Google, not to be left behind acquired API.ai.

Microsoft bought Wand Labs to add more natural language tech to messaging apps and bots, solidifying their focus on “conversation as a platform.”

At this point bots aren’t smart enough to handle all user inputs in a human-like way.

AI Isn’t There Yet.

Having an actual conversation with an AI is not always a great experience.

In fact it can be damn frustrating.

It’s still easier to google an answer (usually) than to ask a chatbot.

And more people still use google than any other

Shopping an E-commerce Site is Easier:

This is definitely true if you’re looking to browse a large scale e-commerce sites that has a big inventory.

A bot does not facilitate a “window shopping” experience well.

Messenger Marketing is hard to do right.

Copywriting for messenger is hard.  It’s unlike any other marketing interaction that we’re traditionally used to using. What works for email and long-form content doesn’t work in messenger.  This misunderstanding can quickly lead to unengaged users.


Because we’re at the beginning stages of the bot revolution – there’s still ambiguity and constant change.  Messenger platforms are continually updating displays, capabilities and even Terms of Service.

“Bots require a lot of testing and support,” according to Mike Slone – CEO of a chatbot focused on the travel industry.

Though teams may be ready to put in the work upfront, in Mike’s experience “they don’t necessarily have the resources to support the bot after it goes live… “